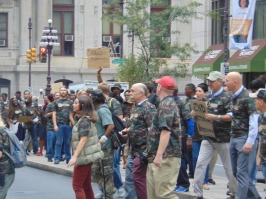 Jim Smith/El Hispano –  According to the Department of Veterans Affairs and Housing and Urban Development, nearly one-in-five of the homeless men we pass daily on park benches or huddling together on the Parkway and our streets are Veterans.

Although the vast majority of homeless vets are of Iraq and Afghanistan, some are Vietnam era (6.3% live below poverty rate).  The homeless veterans span every demographic: 93 percent are male; 49% are white; 34% are African American; 11% are Latino; and 45% are ages 31-50. 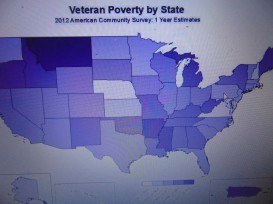 A maps state-by-state where vets most homeless. Pennsylvania and New Jersey have fewer homeless vets.

A “national tragedy” is how former Housing and Urban Development Secretary Shaun Donovan characterized the level of homelessness among vets in 2009. Homelessness is defined by the U.S. legal code as those individuals who, “lack a fixed, regular and adequate nighttime residence.”

Since 2010, the number of homeless veterans in the U.S. has declined 33 percent, from 74,770 to 49, 930.  In Philadelphia, the effort to end homelessness among vets has reached what the Philly Vets Home.org described as an “unprecedented” level of success. 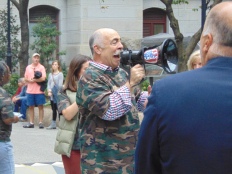 With collaboration between the Nutter administration, the regional office of HUD, the Veterans Multi-Service Center, VA Medical Center and others, more the 1,200 Philadelphia-area veterans have obtained permanent housing in the last two years; a 90 percent decrease in the number of unsheltered local veterans.

The impetus for much of this progress came with studies of Homeless Vets by the VA and HUD in the first years of the Obama administration. By 2014 the administration had launched the, “Mayors Challenge to End Veterans Homelessness.”

The ‘Mayors Challenge’ initiative, spearheaded by First Lady Michelle Obama, entailed a collaborative effort to provide permanent housing to veterans which has garnered the support of 210 mayors and county officials across the country.

Describing Mayor Michael Nutter as one of the many “heroes” in this effort, Ms. Vincent told El Hispano that the Mayor was “one of the earliest mayors to sign on, and he did it without hesitation.” As a result, “Philadelphia is seen around the country as a model.”

While acknowledging the progress made in reducing veterans’ homelessness, the current HUD Secretary Julian Castro says, “We have more work to do. We have an obligation to ensure that every veteran has a place to call home.”