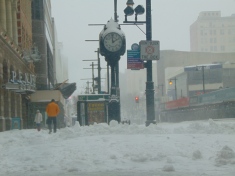 It was just a week-ago, yet the blizzard of January 2016 now seems like a distant memory. Despite forceful winds and closures, it appeared to bring people together in the Barrio and across the region in united efforts to move the hefty loads of white stuff the heavens dumped at record levels on Philadelphia, Reading, CamdenNJ and

The blizzard, for instance, prompted Rev. Gabriel Castro to engage Jesse Torres in helping wipe clean the sidewalk in front of Heavenly Vision Church.  Just a block away a group of men leaned leisurely on shovels, Sunday, watching with a mix of admiration and relief as Alejandro Leon plowed a small street near Allegheny Avenue in the barrio with his snowblower.

Meanwhile, a cozy coffee shop along 8th street evoked an inviting warmth on a cold Saturday night as a serene quiet descended on the Washington Square area with most businesses closed for the weekend due to the storm.

At the height of the blizzard, Saturday afternoon, a number of hearty and undaunted souls ventured out to stroll along a largely deserted Market Street and the Pennsylvania Convention Center. Yet the more than twenty inches of snow had effectively shuttered businesses and the region’s transportation for the weekend.

As the storm receded and residents swept their sidewalks clean, early 19th century Greek Revival homes and their shining brick sidewalks along Spruce street took on an elegantly luminescent character.

Among the hidden treasures of the city, street lamps illuminated snowy heaps surrounding the early 19th century home of Philadelphia’s Nicholas Biddle, the former head of the U.S. Bank, Statesman and Scholar who had a memorable feud with President Andy Jackson. Most business people in Philadelphia and around the country of that era were on Biddle’s side. Nevertheless, Jackson won, establishing an early precedent for government intervention in the workings of the nation’s economy.