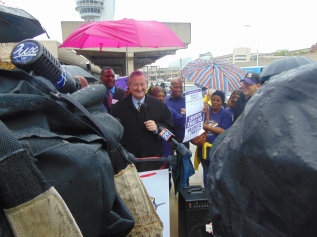 Philadelphia –  On the eve of Thanksgiving, Philadelphia Airport workers joined airport workers from across the country in launching a daylong hunger-strike Wednesday, borrowing a dramatic tactic occasionally used by Cesar Chavez -founder of the United Farm Workers (UFW).

Describing the fast as a “drastic and brave stand,” 32BJ SEIU Mid-Atlantic director Daisy Cruz said the action was taken by baggage handlers, wheelchair attendants, cabin cleaners and terminal security officers to call attention to the plight of workers facing low wages, mistreatment and retaliation for union sympathies from sub-contractors. “We’re fighting to make sure they can make a living-wage and put food on the table.”

Citing numerous instances of intimidation, firings and flouting of city laws requiring a minimum wage of $12 an-hour by airport subcontractors – McGinn Security, PrimeFlight and Prospect- Gabe Morgan, VP of 32BJ Service Employees International Union (SEIU), stressed the goal of lifting airport workers out of poverty. “People have a right to work, a right to work with justice, a right to work with dignity and a right to be able to provide for their families.”

With high turnover rates a byproduct of working conditions at the airport, wheelchair attendants Elliot Perez,19, and Ramon Perez recognized the need for a union after only six months on the job. For Perez,  “It’s not just about money. Every worker wants respect and to earn enough to pay their rent and other bills.”

Despite Philadelphia City Council’s passage of a bill to raise the minimum wage for airport workers to $12 an-hour, SEIU’s Morgan noted that subcontractors continued to pay workers like Elliot Perez and Ramon Perez $8.40 an-hour. Meanwhile, other workers were contending with “intimidation and harassment” from those same contractors.

In introducing Mayor-elect Kenney, the SEIU’s Morgan noted that some issues remained unresolved, but one major change has occurred: “We now have a Mayor who came down here today. A mayor who is standing with us, a mayor who is not just sitting in center city talking about what is happening to folks, but a mayor who has come down here to you.”

“This airport is owned by the citizens and taxpayers of Philadelphia. It’s not owned by Primeflight, it’s not owned by McGinn,” Kenney said.  “We passed a law requiring a $12 an-hour wage and they’re going to follow that law; and come January 4, 2016 (when he takes office) some things are going to change around here.”

“You get up every morning and get ready for work,  just like I do,” added Kenney. “You you are no different than us. And the people in elected office have to understand in Philadelphia – and many of us do – that we are you and you are us. And we’ll have your back.” 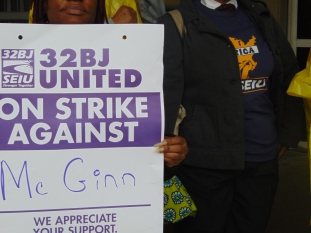 The mayor-elect then paused to recognize a dozen Philadelphia police Officers providing security for striking workers, noting the officers are, “protecting your right to free speech and to assemble.”

Councilman Johnson said the City Council backed Kenney’s notion of the “people’s airport.” He added, “Workers are the backbone of the airport,” and “you have a right to organize and establish your voice.”